Armalyte blasts off once again!

Can you believe it has been over 20 years since we returned to Delta-space to do battle with the H'siffian Khanate?! Well, now here's your chance to re-live that epic battle as Armalyte has now re-launched for the C64.

I've spent the last few days finishing off the packaging for the Psytronik 2009 re-release and I must say it has turned out rather neat. One of the things I enjoy doing with the Psytronik releases is improving on the original release where possible. For example, I typed up the disk instructions using the original Thalamus instructions as a guide. When I reached the SCOREBOARD section I was surprised at how poor the illustration was that depicted the status panel functions. To remedy this for the re-release I used a screen-grab from the game along with red arrows to point out the various functions. Have a look at the pictures from each manual below to compare the difference!

Another thing that I improved for the 2009 instructions was the SHIP ENHANCEMENT section that detailed the power-ups. The original version was text only and the generator power-up had been omitted completely! For the new version I included images of each power-up so you know what you are collecting and included the generator power-up in the manual. I know it's not really vitally important to include these things to the manual but it's nice to be able improve on things where possible ... :)

And talking of improving things, I received the completed disk menu from Jason 'TMR' Kelk yesterday. I really liked the disk menu that came with the original disk version of Armalyte (I loved those colour cycling rasters in the original) so I thought it would be neat to feature something similar in the re-release. As side 1 of the disk contains just the actual game there was no need for a disk menu there - but side 2 is a different kettle of fish entirely (who exactly keeps their fish in a kettle by the way?) Anyway, as side 2 of the disk contains lots of goodies (the loading screen + music, two Walkers Warbles music demos, three rare Armalyte game previews and a demo of the unreleased Armalyte 2) I asked TMR to produce a menu for side 2 done in the style of the original menu - and he did just that!

When I received the menu the first thing I did was prod number 1 to try out the loading pic. But nothing happened! So I tried all the number keys and nothing loaded ... umm! The penny then dropped and I tried moving the joystick - and the cycling colours moved! Pressing fire then loaded the desired program. I didn't actually realise you could use the joystick to select a file on the original C64 version - I've always used the number keys (and to think I've owned the original disk version for over 20 years! hehe!) Anyway, I asked Mr Kelk if he could also add keyboard select to the menu and he did just that, what a nice chap!

Anyway, now that the disk contents are ready and the packaging and instructions are complete the first wave of Armalyte deluxe editions are now ready to launch. Here's a photo of a few of them in all their shiny loveliness! These will hit the Royal Mail this week so if you've pre-ordered the C64 disk version you won't have to wait long now. 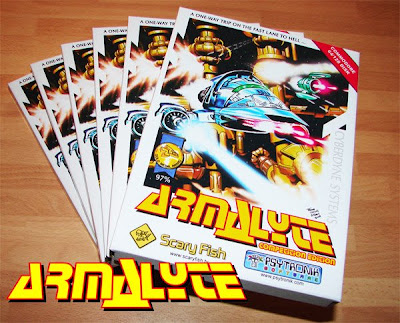 And now some exciting news for those of you looking forward to the PC remake of the game. Smila has uploaded a video featuring footage from the PC version of the game. I nagged him to include the Philip Glass music as it gave me goosebumps when I watched the video while listening to that music! Obviously we can't use this particular track in the PC remake of the game but I'm hoping the in-game music will be inspired by it!

You can order the 2009 C64 Edition of Armalyte NOW from the Binary Zone Interactive store (click HERE for details). You will be also be able to pre-order the PC version soon as well (keep an eye on this blog for details).

Until next time, per aspera ad astra!