One of the most difficult things I've had to do since relaunching Psytronik Software is to find a good way to package C64 disks. The tapes were easy to do as people still use tapes and you can quite easily buy blank tapes and empty cases. Disks on the other hand were an entirely different matter. As soon as the first couple of Psytronik tape games appeared I received emails asking if disk versions would be available so it was obvious I needed to release the games on disk as well ... but how? I couldn't exactly walk into my local stationary shop and ask for some 5.25" floppy disk cases - I would have gotten some funny looks doing that in 2008!

My initial idea for the Psytronik disks was to package them in plastic wallets - the same as the ones US Gold and Melbourne House used back in the day. I thought as the packaging was quite generic something similar still may be on the market today ... I was wrong. After much trawling through the web and stationary catalogues I couldn't find anything even resembling the wallets. So I then moved onto plan B. I contacted a plastic manufacturing company and told them what I was after. They seemed to think they could help so I sent them a US Gold game case to examine. Good news! They had the equipment to produce similar wallets and sent me a sample which, although not perfect (their equipment would have to be calibrated to produce the proper sleeves) it was close enough. Enclosed with the sample was a price quote for supplying 200 of the wallets - it was almost 900 pounds!! This meant the disk wallets alone would cost almost £5.00 each (and that doesn't include the artwork, floppy disk, disk sleeve, disk label and instruction sheet). 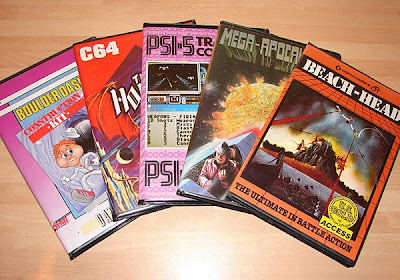 C64 disk wallets - it's not cheap to produce these in 2009!
I abandoned that idea and resumed my search. As I had no luck finding plastic cases or wallets my helpful chum Dave (from Retro Software) pointed me to a site that sold cardboard packaging. I rather liked their white boxes and the internal measurements were just right to hold a C64 floppy disk. As the boxes were rectangular it meant I could use the same artwork that I used for the Psytronik tapes. With the boxes bookmarked I then searched for glossy labels I could stick to the boxes. I found some A4 glossy labels online but they were a tad pricey. As I was really keen on getting the disk range launched I took the plunge and ordered 200 labels. Fortunately, the labels were excellent quality. I designed templates that could be cut out and folded around the white boxes. There was enough room on an A4 page to also include a label for the back of the box, a Psytronik logo and the disk label! The Psytronik Deluxe Disk Range was born. 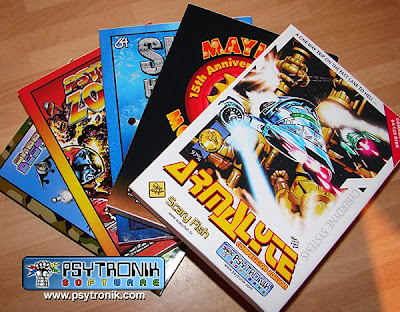 The Deluxe Range meant I could make disk games available at last.
The Deluxe range wasn't without its problems however. I hadn't taken into consideration how long it would take to produce each box. Every single box had to assembled, the artwork printed, cut out and applied to the front and back. Fiddly! The boxes were also a pain to package and post. They had to be reinforced inside so they didn't get squashed during transit - and I also had to include extra packing inside (along with loads of bubble-wrap) to protect them from the wrath of the Royal Mail. Still, the boxes looked cool though so I was willing to put up with the hassle of producing them ... but then disaster struck! In April 2009 the place where I bought the A4 glossy labels stopped trading. Aargh! A search for alternative glossy labels immediately ensued and I managed to find some A4 glossy vinyl labels. These were excellent quality, really nice to work with but were REALLY expensive. So now I had a decision to make ... do I increase the price of deluxe games or try one last time to find alternative packaging. I opted for the latter ...

With time (and glossy labels) rapidly running out I went back to searching for plastic cases. This was actually inspired by my office job in the "real world". We received an update for the accounting package we use and the CD came in a 5.25" plastic case just like C64 games used to use. "Aha!" I thought. If this company is using them then you must still be able to buy them. A more intensive search ensued along with emails to suppliers I used in my previous job ... One of my old contacts replied saying he could supply cases the size I required. I tentatively ordered a box of cases from him and waited for them to arrive. Not quite knowing what to expect I ripped into the package that arrived a few days later and my heart jumped when I saw what was inside. The cases I received were almost *identical* to the ones that C64 games were packaged in back in the day ... but these were brand new!!! Using measurements from an original C64 game sleeve as a guide I produced a template that I could use to adapt the existing Psytronik game artwork to fit on the new sleeve. A test inlay was printed and I was gobsmacked ... I has holding in my hand a *proper* C64 disk game in a plastic case! The Psytronik Software Premium Range was born. 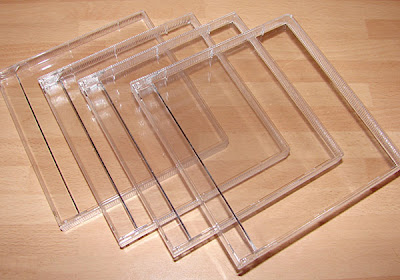 You have no idea how long it has taken me to find these cases!
The last few weeks have been spent producing new artwork for ALL the Psytronik Premium titles. The good thing about re-doing all the artwork is I was able to *improve* on the game artwork in places ... It was fun adding little things like having the catalogue number on the spine, moving the Psytronik slab logo to BELOW the fist logo (I have no idea why it was above on the tape spines!), fitting FOUR screenshots on the back of the disk inlay and for the final embellishment - a nice gold (or silver) PREMIUM EDITION logo now proudly adorns the front of each inlay. 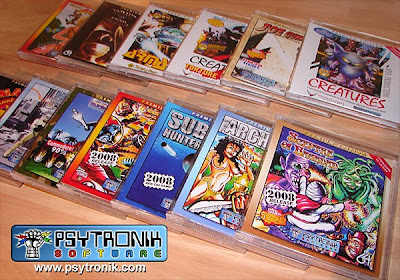 Psytronik Premium Disk Releases - Now that's what I'm talking about!
I'm really pleased (and relieved!) to have finally solved the problem with the disk packaging. The Premium Psytronik releases look exactly how I wanted the Psytronik disks to look originally - just like proper C64 games from back in the C64's heyday! You can now order ALL the Psytronik disk games in the Premium packaging (CLICK HERE) and don't worry if you've already bought budget or deluxe versions, you can upgrade your existing versions to Premium Versions! (CLICK HERE). 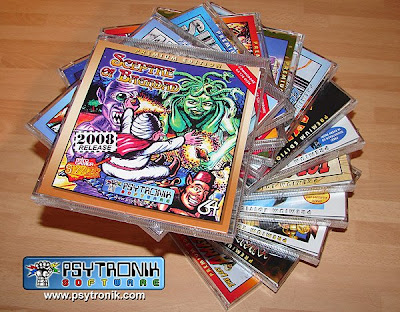 The new Premium range - it's all spiralling out of control! :)
Please note that I will be discontinuing the Deluxe Range as soon as I've used up my last few labels and cardboard boxes - so if you want any Deluxe titles for your collection you'd better be quick! :)