The quest for the Holy Grail

A forthcoming Psytronik C64 release that I'm particularly looking forward to is Knight 'n' Grail. The game is being programmed by Mikael Tillander with additional graphics (and box artwork) by Håkon 'Archmage' Repstad and it really is shaping up into something special.

I've been playtesting the game recently and the more I've been playing it the more it has been impressing me. So much so in fact I thought I'd devote a blog entry to the game just so I can bring you some screenshots from the game. Before that though, here's a preview of the superb box artwork by Archmage to whet your appetites:- 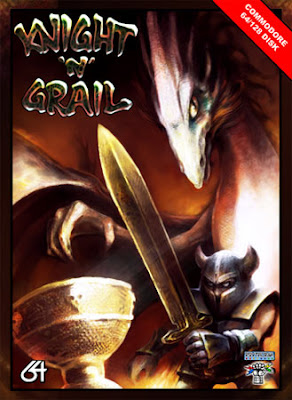 The game features a brave armour-clad Knight on a quest to find the legendary Holy Grail. The game begins in a castle which you must explore. Scattered around are switches that open up new areas when you smash them with your sword. You must also find special suits of armour and swords which are important for your quest.

The game is made up of over 200 (!) screens split into different scrolling areas. During your quest your will encounter various monsters and an assortment of rather large bosses. Lets take a look at some screens from the game shall we?

The picture above is from quite early in the game. The Knight is wearing the the armour of water which he has just collected. This will make him immune from the water dripping from the ceiling. Using the elemental armour is an important part of the game - but that's all I'm going to say about that! :)

Another screen from inside the castle. The knight is battling some spinning stone nasties here. These guys are made of pretty solid stuff so it's better to dodge underneath them as they bounce up and down rather than waste time hurling your sword at them. You can use your sword to kill a lot of the enemies in the game and certain swords are more effective against certain enemies.

Here's a shot of the Upper Cave. The Knight has encountered a tall stone Golem who takes a quite a few hits to kill. One of the things I like about the game is how it uses scrolling. The areas you explore in the game scroll smoothly horizontally. This is very impressive especially considering how much colour is being displayed on screen.

Here you can see the Knight riding a mine-cart in the game! Wheeee! Not only do you use the mine-cart to travel along this part of the game but you will also need to stand on it to reach some objects high up on the screen.

Our brave night has found the well of wishes. This is actually a teleport that allows you to travel from one end of the map to the other instantly (which saves a lot of time as this is a BIG game!)

I love this section of the game - it really reminds me of the bridge section from Ghosts 'n' Goblins. The fireball that you can see in front of the Knight has actually burst through the ground from the lava below. I love the use of colour in this area - superb! One of the (many) things I like about this game is how it rewards you with some new gorgeously drawn background graphics, monsters or even a boss confrontation as you progress through the game. It really makes you keep wanting to carry on playing just so you can see the deeper levels of the game!

Here be dragons! This is just one of the awesome bosses that you will encounter in the game. This particular dragon attacks you with a hail of ice. Wearing the correct armour will protect you from that - but you still have to defeat the dragon itself!

Here's our hero battling through the lower temple. Not only has the Knight got to contend with claws bursting through the floor but an evil wizard is trying to Zzap! him with magic too. I guess you could say it's a hard days Knight (gnn!) Dig that shiny gold armour though - you will have to work hard to earn that (but lets just say it's definitely worth the effort!)

Knight 'n' Grail is really coming together nicely now and most (if not all) of the screens are now in place. I've just played a version that includes music for the first time and it works really well and adds lots of atmosphere to this beautifully constructed game (the title tune is reminiscent of the classic C64 theme from Ghosts 'n' Goblins - how cool is that?!) All being well the game will be available to order on disk for the C64 in June 2009 from www.psytronik.com so please keep an eye on the website (and this blog) for more details.