SOULLESS - Unleash the beast from your C64!

With the release of the amazing new Commodore 64 title SOULLESS now imminent I thought I would treat you guys & gals to some more details about the game, previously unreleased screenshots and some sneaky peeks at the lush new packaging that we are working on.

Firstly, a bit about the game itself. SOULLESS tells the story of Rizek, the ruler of a war-torn land who grew weary of battle. He declared a time of peace but was betrayed by his bloodthirsty Generals who wanted the wars to continue. The Generals plotted against Rizek and enlisted the help of Kalen, an evil Wizard who cast a spell on Rizek, transforming him into a grotesque beast, robbing him of his soul and casting him into a dungeon for all time. Rizek was locked away and forgotten for a thousand years - until a great quake shattered the walls of his cell. Rizek was at last FREE and began his quest to reclaim both his soul and his kingdom. And that is where the game begins.

A still from the superb animated intro!
You start off in the dungeons and must find your way from the deep dungeon into the nearby temple. The dungeon area is inhabited with a few guards and there are no objects to search - so this is a good way to familiarize yourself with the controls and to learn how to avoid the guards and other monsters that inhabit the game.

Rizek begins his quest deep in the dungeons
As you enter the main temple you will encounter searchable objects. Hidden away throughout the game are twelve randomly placed SPIRIT STONES - you will need to find all 12 of these and then take them to the Soul Chamber and place them in the correct order in order to reclaim your imprisoned soul. This gameplay dynamic is similar to Impossible Mission - but, thankfully, is much simpler. The correct order in which you have to place the Spirit Stones is shown in the form of clues that are displayed on the walls of 12 rooms in the game. Each time you encounter one of these clues all you have to do is make of note of the Spirit Stone and which slot you must place it in the Soul Chamber. One of the clues is shown in the screenshot below.

The red clue on the wall shows where to place one of the Spirit Stones
It will help if you keep a note of these as you play the game
The game will even include a printable Spirit Stone sheet in which you can record the position of the Spirit Stones each time you play it. So don't worry if you are are put off by the puzzle aspect of the game, it's very easy to pick up and makes for a very enjoyable part of the game. The searchable objects in the game also contain other things as well as the vital Spirit Stones. Some contain different magic spells that will either slow down, freeze or destroy all the enemies on the screen. You will also find gold & rubies that will increase your score along with potions that will restore your life energy or give you extra lives.

Boom! Rizek has just destroyed all the enemies onscreen by finding Red Magic hidden in an object!
You will also encounter spawn points scattered throughout the map. Once you have activated a spawn point you will return to that point if you lose a life. You can also replenish your life energy from a spawn point as well. You will find that some areas of the map are blocked by locked doors. You will need to find keys to open these doors in order to access more parts of the map. Once you have correctly placed all 12 Spirit Stones in the Soul Chamber Rizek will reclaim his soul and your quest will be complete!

Rizek poses for a photo near to a spawn point
SOULLESS was designed by Trevor 'Smila' Story who also produced the amazingly detailed graphics for the game. The game was programmed by Georg 'Endurion' Rottensteiner (author of the hugely popular C64 game Joe Gunn) and should prove popular with Joe Gunn fans as it does share a few similarities (I.E. It's a huge flick-screen adventure!) - although the main character sprite in SOULLESS is much bigger (think Draconus, crossed with Impossible Mission with a hint of Shadow of the Beast!) Amazingly, the main game and its lavishly detailed 70+ screen map has been crammed into a single load - with the animated intro and end sequence included as separate files (the end sequence can only be accessed once you have completed the game of course). The atmospheric soundtracks for the game were composed by Mikkel 'Encore' Hastrup. 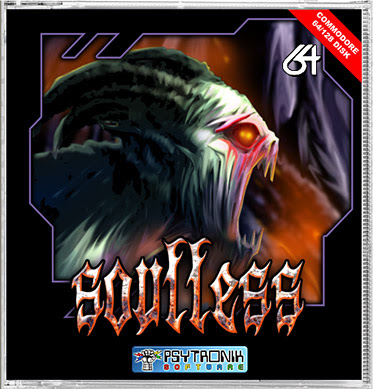 The awesome Premium Disk cover artwork by Smila
To make SOULLESS an extra special release for C64 fans we have really gone to town with the packaging on this one. The game will include a stunning full colour A3 print that features a complete map of the game on one side and a poster of the game artwork on the other. The game will also include a superb 16 page comic booklet showing the game back-story along with a companion CD that features an emulator compatible version of the game, bonus 'making of' materials, a printable Spirit Stone sheet to help you with your quest, the game soundtracks digitally recorded from a real C64 and much more! 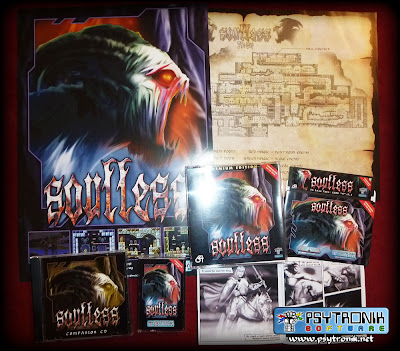 A sneaky peek at the Soulless goodies - including the A3 poster / map,compantion CD, tape & disk versions of the game and the comic book!
SOULLESS will be released in May 2012 and you will be able to buy the game on C64 tape, 5.25" disk and as a digital download from www.psytronik.net and on C64 cartridge from www.rgcd.co.uk.